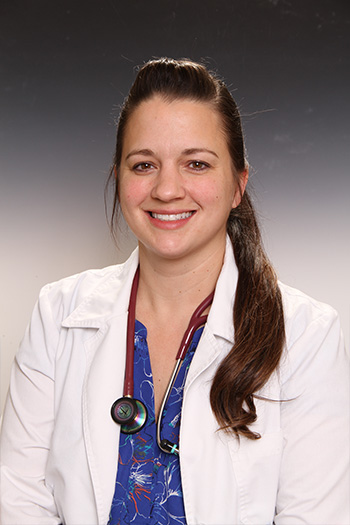 Dr. Cassie Wooden grew up in the small town of Galion, OH with five siblings and her two loving parents. She discovered a passion for helping animals at a young age, which ultimately drove her focus toward veterinary medicine.

In 2002, Cassie moved to the Columbus area to pursue pre-veterinary medicine at The Ohio State University. While attending college, she worked as a receptionist and veterinary assistant for Healthy Pets of Wedgewood. Cassie completed her Bachelor’s degree of Animal Science in 2006. Having a strong desire to learn all aspects of veterinary medicine, she then welcomed the position as hospital manager at Healthy Pets of Wedgewood. Shortly thereafter, she was accepted into The OSU College of Veterinary Medicine and graduated with the class of 2012.

Cassie established herself as a small animal veterinarian at Healthy Pets of Westgate in Columbus, OH. She quickly became proficient at small animal medicine and soft tissue surgery; however, she also held a special interest in small animal dentistry. After two years of practice, Healthy Pets carried Cassie on to a new venture of opening her own small animal clinic in Delaware, OH. She was the sole practitioner of Vetcare Animal Wellness for nearly 3 years. During that time, Cassie was married and began a “human” family of her own. It was at that point that she decided to change paths, she accepted a new position as a relief veterinarian through Lighthouse Veterinary Personnel. She practiced for over a year throughout the veterinary clinics/hospitals of Columbus and surrounding areas. In September of 2018, Cassie decided to settle into one location with acceptance of the Medical Director position at Marysville Animal Care Center.

Cassie now resides in Sunbury, OH with her husband, two stepsons and 1.5-year-old baby girl. They live on a small farm that is home to 12 goats, 4 dogs, 9 cats, 2 tortoises and numerous chickens. During free time, Cassie enjoys gardening, hiking and simply staying at home with the family.